Posted by Lina Falcão at 11:54
Email ThisBlogThis!Share to TwitterShare to FacebookShare to Pinterest

The Project
The Great Parchment Book consists of 165 separate parchment pages, all of which suffered damage in the fire in 1786. Due to its fragile state, it has not been accessible to readers since this date. The uneven shrinkage and distortion caused by fire has rendered much of the text illegible. The surviving 165 folios (including fragments and unidentified folios) are stored in 19 boxes, loosely tied into bundles drawing together as far as possible the passages dealing with the particular lands of different livery companies and of the Society. Much of the text is still visible (if distorted) and requires flattening and digital imaging to improve legibility and to enable digital access to the volume.
In the course of surveying the Irish Society’s collection with a view to contributing loans to Derry’s upcoming exhibition to mark the 400th anniversary of the building of the City walls in 2013, it was decided to investigate the possibility of conserving the Great Parchment Book. It soon became apparent that traditional conservation alone would not produce sufficient results to make the manuscript accessible or suitable for exhibition.
However, the importance of the item led us to explore other ways of opening up access to the text. A partnership with the Department of Computer Science and the Centre for Digital Humanities at University College London (UCL) established a four year EngD in the Virtual Environments, Imaging and Visualisation programme in September 2010 (funded by the Engineering and Physical Sciences Research Council (EPSRC) and LMA) with the intention of developing software that will enable the manipulation of digital images of the book rather than the object itself. The aim is to make the distorted text legible, and ideally to reconstitute the manuscript digitally. If successful, such a methodology clearly has much wider potential application.
To make the digitisation process as successful as possible, preliminary limited but crucial conservation treatments will be carried out. Obscured areas of parchment, where the camera cannot reach the text, will be opened out as far as possible. Also, as part of the conservation project, the format and condition of the book will be investigated and thoroughly documented. Advice has been given by Collections Care staff at The National Archives and the British Library, and LMA is a member of the Improved Damage Assessment of Parchment network (IDAP). LMA is grateful to the National Manuscripts Conservation Trust for providing funding for the conservation work.
The overall scheme is a large collaborative undertaking in which the practical conservation of the Great Parchment Book is the essential first step. Once the book has been treated, then the UCL research project can produce high quality 3-D digital images from which a transcription and glossary can be drawn.  The project is being supported by Derry City Council, as well as the Irish Society itself, and it is hoped that the book will play a significant role in the 2013 events marking the 400th Anniversary in Derry. The digital image and transcription will provide a lasting resource for historians researching the Plantation of Ulster in local, national and international contexts. The scheme thus represents a major partnership of international significance between a number of institutions.
(Text available from the blog)

Leather bucket found on board of the Mary Rose, 16th century 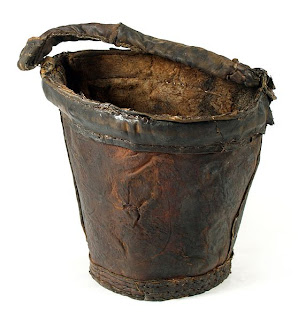