Abstract:
In 2008, a well preserved and complete shoe was recovered at the base of a Chalcolithic pit in the cave of Areni-1, Armenia. Here, we discuss the chronology of this find, its archaeological context and its relevance to the study of the evolution of footwear. Two leather samples and one grass sample from the shoe were dated at the Oxford Radiocarbon Accelerator Unit (ORAU). A third leather sample was dated at the University of California-Irvine Accelerator Mass Spectrometry Facility (UCIAMS). The R_Combine function for the three leather samples provides a date range of 3627–3377 Cal BC (95.4% confidence interval) and the calibrated range for the straw is contemporaneous (3627–3377 Cal BC). The shoe was stuffed with loose, unfastened grass (Poaceae) without clear orientation which was more than likely used to maintain the shape of the shoe and/or prepare it for storage. The shoe is 24.5 cm long (European size 37), 7.6 to 10 cm wide, and was made from a single piece of leather that wrapped around the foot. It was worn and shaped to the wearer's right foot, particularly around the heel and hallux where the highest pressure is exerted in normal gait. The Chalcolithic shoe provides solid evidence for the use of footwear among Old World populations at least since the Chalcolithic. Other 4th millennium discoveries of shoes (Italian and Swiss Alps), and sandals (Southern Israel) indicate that more than one type of footwear existed during the 4th millennium BC, and that we should expect to discover more regional variations in the manufacturing and style of shoes where preservation conditions permit.
Posted by Lina Falcão at 23:50
Email ThisBlogThis!Share to TwitterShare to FacebookShare to Pinterest 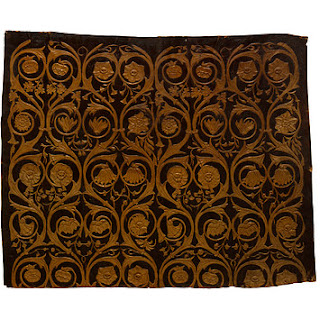 "The beginnings of leather chemistry" by Seymour-Jones (1927)

Riccardi, A.; Mercuri, F.; Paoloni, S.; Zammit, U.; Marinelli, M.; Scudieri, F.; ”Parchment ageing study: new methods based on thermal transport and shrinkage analysis”, e-Preservation Science 7 (2010) 87-95
PDF
Abstract:
The structure of the parchment and its preservation state have been studied by means of novel methods based on the analysis of the heat diffusion and shrinkage activity. Investigations have been performed on modern, inked and non-inked, parchment artificially aged in different conditions, as well as on modern non-aged and historical parchment samples. By means of the infrared thermography, the thermal diffusivity D has been measured along different directions, perpendicular and parallel to the parchment leaf plane respectively, in order to characterize its anisotropy and the way it depends on ageing. Thermographic investigations have also enabled the analysis of extended micro damages induced in the parchment layered structure by the combined effect of ink and ageing. Finally, quantitative information on the degradation induced by artificially ageing have been obtained by the analysis of the hydrothermal shrinkage activity of the parchment fibres by means of a new method based on light transmission measurements.
Posted by Lina Falcão at 23:00
Email ThisBlogThis!Share to TwitterShare to FacebookShare to Pinterest
Newer Posts Older Posts Home
Subscribe to: Posts (Atom)