Abstract:
In this study, we address the question of the provenance and origin of the Dead Sea Scrolls manuscripts. A characteristic low ratio of chlorine to bromine, corresponding to that of the Dead Sea water, may serve as an indicator for local production. For this aim we developed a non-destructive procedure to determine the Cl/Br ratio in the parchment of these manuscripts. Micro-X-ray fluorescence (μ-XRF) measurements of a large number of parchment and leather fragments from the Dead Sea Scrolls were analyzed with a routine we developed based on fundamental parameter quantification. This routine takes into account the absorption of the collagen matrix and the influence of the different sample thicknesses. To calculate the representative Cl/Br ratio for each fragment, we investigated the lateral homogeneity and determined the total mass deposition using the intensity of the inelastically scattered, characteristic tube radiation. The distribution of the Cl/Br ratios thus obtained from the μ-XRF measurements make it possible to distinguish fragments whose origin lies within the Dead Sea region from those produced in other locations.

Abstract:
In this work, we applied scanning electron microscopy (SEM), microanalysis and Raman spectroscopy to study the fungi inhabiting a richly illuminated parchment document and the damage induced by their activity. To that aim, we collected samples of fungal mycelium from the deteriorated areas on a removable adhesive tape specifically intended for lifting fungi without damaging the support. SEM analysis of the adhesive tape samples showed the co-occurrence of several species of fungi. One strain closely resembling Acremonium species was observed only in the tape micrographs but no agar cultures were obtained. Its fungal structures showed the production of abundant oxalates with an outstanding leaching of the calcium-based materials of parchment (typically manufactured with gypsum and lime). Needle-like crystals of calcium oxalate produced by the fungus forming a uniform and quite regular grid around conidial slimy heads were documented. As a result, the areas affected by moulds were weakened, stained and characterised by a powdery patina rich in calcium. Confocal μ-Raman confirmed the presence of oxalates while EDS showed the presence of calcium in crystals. We conclude that the defacement of the parchment was due to both collagenolytic activity, and to the biotransformation of calcium-based minerals by fungi.

Abstract:
Unilateral and solid-state nuclear magnetic resonance (NMR) analyses were performed on a parchment fragment of the Dead Sea Scroll (DSS). The analyzed sample belongs to the collection of non-inscribed and non treated fragments of known archaeological provenance from the John Rylands University Library in Manchester. Therefore, it can be considered as original DSS material free from any contamination related to the post-discovery period. Considering the paramount significance of the DSS, non invasive approaches and portable in situ non destructive methods are of fundamental importance for the determination of composition, structure, and chemical–physical properties of the materials under study. NMR studies reveal low amounts of water content associated with very short proton relaxation times, T 1, indicating a high level of deterioration of collagen molecules within scroll fragments. In addition, 13C cross-polarization magic-angle-spinning (CPMAS) NMR spectroscopy shows characteristic peaks of lipids whose presence we attribute to the production technology that did not involve liming. Extraction with chloroform led to the reduction of both lipid and protein signals in the 13C CPMAS spectrum indicating probable involvement of lipids in parchment degradation processes. NMR absorption and relaxation measurements provide non destructive, discriminative, and sensitive tools for studying the deterioration effects on the organization and properties of water and collagen within ancient manuscripts.

Abstract:
Parchment has been in use for thousands of years and has been used as the writing or drawing support for many important historic works. A variety of analytical techniques is currently used for routine assessment of the degree of denaturation of historic parchment; however, because parchment has a heterogeneous nature, analytical methods with high spatial resolution are desirable. In this work, the use of small-angle X-ray scattering (SAXS) and synchrotron-IR (SR-IR) was examined in conjunction with multivariate data analysis to study degradation of an extended set of historic parchment samples, and particularly to investigate the effect of lipids and the presence of iron gall ink on the degradation processes. In the data analysis, shrinkage temperature, lipid content, sample age, presence of ink and accelerated degradation were included. The analysis of loading factors in partial least-squares regression and principal component analyses based on SAXS, SR-IR and other analytical and descriptive data reveals the effect of lipid removal on diffraction patterns, and lipids are found to cause the degradation process in parchment to accelerate. The effect of iron gall ink is also evident, although the mechanism of ageing is different to that of natural ageing in the absence of ink. In addition, a historic parchment score from ca. 1750 is examined, demonstrating the significant effect of iron gall ink, and lipids and inorganic soiling on its increased degradation.
Posted by Lina Falcão at 15:52
Email ThisBlogThis!Share to TwitterShare to FacebookShare to Pinterest 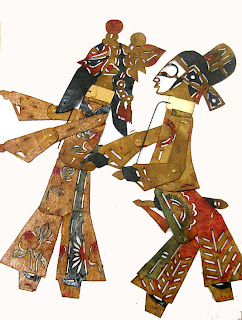